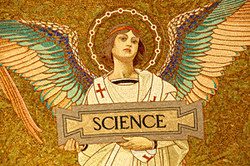 I was born and raised in a Roman Catholic family and educated in a “Christian brothers” school. Taught stories from the Bible in religion class, and millions of years and evolution in history, geography and science classes. I was taught that the Bible wasn’t literal. I was told the stories were all metaphorical and allegorical. This sounded intelligent to my young mind so I believed it.


I was always interested in science and nature as a boy and I wanted to be a scientist when I grew up. I used to read two weekly magazines when I was young, one about dinosaurs and the other about the human body. They were both laced with evolutionary teaching, and because it was called “science”, I took it as fact.

Along with the superstition of Roman Catholicism, this mixture of evolution and religion produced in me a belief in God, but a denial of His Word. If evolution was true and we came from apes, and dinosaurs lived 65 million years ago, and the universe was 4.5 billion years old, the Bible was wrong. I remember taking some classes before making my confirmation. We had to take the pledge to never touch alcohol and keep ourselves pure. I was sitting with my Ma holding some little candle while everyone made this vow. I’ll never forget thinking that, even though everybody looked so serious and solemn, everyone was just pretending that they believed. I certainly was.

I didn’t believe in Hell, but I was clever enough to cover myself with prayers just in case it was real. “Dear Lord, please forgive my sins and bless me and protect me from all evil”, I developed this prayer myself and prayed it nearly every day. If I done something I knew was wrong I couldn’t sleep until I prayed that prayer. But I still loved sin and it didn’t bother me to commit premeditated sin with the view of just getting the slate wiped clean afterward. There was no true grace of God in my heart.

One day while in secondary school our class was sent to wait in the school chapel and made, one by one, to go confess our sins to the priest. Because of the guilt I felt from things I’d done as a boy, and the unwillingness to tell another soul, I asked the priest if I could confess my sins directly to God Himself for forgiveness, (just to check with him if the above mentioned prayer was acceptable to God) He wasn’t happy with that question and immediately started asking me to tell him the nature of my sins. Needless to say, I told him nothing.

Through my teenage years I got deeper into a life of sin. Drink, drugs and sexual immorality. I also drifted from my love for science and education into music. Rock music mainly. I wanted to be a rock star. Even though I got to college to study science, I had dropped out in my heart years before. I just barely scraped my way in. College was just a party and a waste of time, apart from one thing. I met a new fiend there. I started to hang out with him and his younger brother, who became the drummer in our band.

Going to their house was the first time I was ever exposed to the gospel. Their Ma was a Born-again Christian and they’d been in church since they were kids. And even though the lads didn’t walk with the Lord they told me about the Bible being the literal Word of God, about creation and the need to be born-again. I was outraged at what I’d heard! The Light of God had shone in the darkness of my heart and I hated it because my deeds were evil. My religion was worthless in God’s sight and I was yet in my sins. It made me so angry that if I could have, I would have killed God. I argued with them constantly trying to justify myself before God. The truth was I loved my sins but just didn’t want to go to hell.

For some reason I went to church with them one night. I reluctantly went inside and just mocked from a balcony. Another time I went in drunk and on drugs. One day while in my friend’s house, their Ma brought in a tape about science and the Bible. Usually I’d mock such things, but I watched it. It showed me things I was never taught in school, it even showed me lies I’d been taught in school. It talked about the flood in the Bible and it made sense. It showed how the theory of evolution is impossible. I started to believe that the Bible was God’s Word. “If God is, and is all powerful, of course He can create the whole universe, our world included, in 6 literal days. Of course he can do things that I can’t understand!” These new thoughts came into my head. The Lord was drawing me.

I went to church sometime after this with an openness to hear. When the preacher asked at the end of his message if anyone wanted to be saved and that any sinner can be, I believed him. I asked the Lord to save me. I believed the Bible, that Jesus Christ was the Son of God and that he died and rose for me, to save me from my sins! A great struggle began in me over the next few weeks, but when I first realised all my sins could be forgiven me by the blood of Jesus I wept and wailed at the back of the church uncontrollably. I tried biting my fist to hold it in, but I couldn’t. It was too much. Thank God for his mercy!

The Lord set me free from drink and drugs, I stopped sleeping around and going out to the pubs and clubs. My foul mouth and love for profane music and films was taken away. The Lord put a hunger in me for His Word, to pray and seek His face, a desire to walk right with Him and to serve Him, He convicts me if I sin to repent and get right with Him. I’ve seen the salvation of a beautiful young woman who became my wife. We have 3 beautiful daughters and I know without the Lord I could never be a husband or a father, I’d be too selfish and childish, I’d be an absentee, drunk of a father. Thank God for Jesus!

One thing I’ve seen since coming to know the Lord is that life is a vapour. Most of the things that we occupy ourselves with and strive to get or own are vanity and the end of it pointless. One day your house will be empty and your kids will be gone. One day you will be forced to retire from your job. One day your looks will be withered and your strength will fail. One day there'll be no more plans to make or parties to go to. One day you'll die and stand before the Lord to give account of yourself. In the Lord Jesus Christ, hope was set before me and I fled to lay hold on it. Jesus says whosoever comes to Him He will not cast out. Nobody liked Zaccheaus the sinner, but Jesus had time for him. Are you the worst of all mankind? Though hypocritical men just as bad as you in the Lord’s sight but ignorant of their own wicked hearts would condemn you to death, If you come to Him through Jesus, the Lord merciful and mighty, the only one who would be justified in condemning you, He will forgive your sins and save you to the utmost. The Lord God Almighty is the point of everything! Praise God!