Christ or Mass? - How to Recieve Christ in Reality. 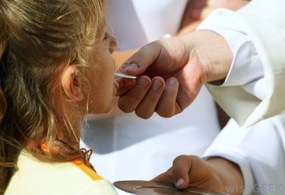 I asked Jesus into my heart after my brother came to know Jesus as Saviour and began to share the Gospel with my family. For ages I had no interest in what he had to say about the bible, Jesus death and resurrection, repentance or what was going on in the world. As far as I was concerned, I was a “good” Catholic seeking God by going to mass and going through all the ritual to try and please God.

I thought my brother was going through a phase of trying out something new and I’d just carry on being a Catholic, that is until he began to question me about the origins of Catholicism. I fought with him a lot about this to cover the fact that I really didn’t know anything about the Roman Catholic church or why I was even a Catholic other than I was born into it and was told throughout my life that it was the only way to Heaven; and even then nobody could guarentee me that a “good” Catholic would get to Heaven.

Anytime anything went wrong in my life or I felt the slightest bit of worry I would run to mass. I would feel good for the 45-60 minute service, walk out the door and have the same weight sitting on my chest or worries plauging my mind. It gave me no true peace or joy, but an inflated feeling of pride and arrogance at how great I was that I had gone to mass to please God. It never calmed any of my worries or anxieties.

After discovering this for myself and realising that God had showed me the truth, I began to listen to what my brother had to say about God, the Bible and Jesus Christ. I had always believed in Jesus and believed in the crucifiction but never understood why Jesus had to die on the cross or the significance of his resurrection from the dead. Jesus was always on the sideline of my faith in God and I had more faith in Mary as the “Mother of God” than Jesus as the Son of God, Saviour of the World and intercessor between man and God (John 14:6).

My brother explained to me time and again that Jesus had to die on the cross to bare the punishment for the sin each of us have committed against God, so that each of us in accepting this and repenting of our sin, could enter into a personal relationship with Jesus as Saviour and have assurance of eternal life in Heaven with God through Jesus (Romans 10:9).

I was fully convinced of Jesus death and resurrection but I still didn’t see myself as a sinner. I thought of myself as a good person, I wasn’t mean to anyone, I didn’t steal or committ any major crimes or break the law. I believed I’d have to go to purgatory for a time before going to Heaven but I never believed I’d go to Hell. I remember being taught the Ten Commandments in school and being told that we were supposed to keep them, but that they were more guidelines as to how we should live and that if we were good people that it was ok if we broke them from time to time.

My brother showed me in the Bible that God is a righteous Judge and his ways are far above ours and that all the righteousness we think we have in being “good people” is as filthy rags to God. He told me that if I had ever taken the Lords name in vain that made me a blasphemer, if I had ever lied including ‘little white lies’ that meant I was a liar before God. He told me that if I was angry with or hated anyone that made me a murderer by Gods standards and God has to punish sin accordingly which means eternity cut off from his mercies.....in Hell. He explained to me the Bible mentions nothing of out-weighing your sin with the good you’ve done in your life or of working off sin in purgatory but very much warns about the fires of Hell that are real because God can not and will not let sin into Heaven; no matter how many good deeds you have done in your life.

I let on for a while that this didn’t bother me but secretly I would watch sermons to find out more. Then I began to ask my brother more questions about everything. I really wanted to know about Jesus and how I could have a relationship with Him, how do I repent and what do I have to do to be Born-again; my brother explained to me this is what happens when a person calls out to God, asks forgiveness for their sin and asks to have a relationship with Jesus. God gives that person a new desire in their heart to change and be made more like Jesus, and do what is pleasing to God.

I wanted this, to have a real relationship with God, to know Jesus as my Saviour and to have the peace and assurance my brother had. I had always been the religious sibling and for the first time in my life I felt jealous of my brothers simple faith in Jesus, something had changed him.

I continued watching sermons and began to read the Bible but I had not changed and my ways had not changed because I hadn’t called out to God to forgive me and save me from the wages of my sin (Romans 6:23). Then God began to open my eyes to my need for Him which caused my to cry out to Him from my heart. I began to do this after nearly every sermon I watched and after reading the Bible, for a while it almost became a new ritual until the Lord revealed to me the reality of this glorious salvation. I had been forgiven of all my sin and I fully realised what it meant that Jesus died for me. I finally had the realisation that Jesus was now in control of my life, I had no more burdens to carry, I was free and I just wept tears of joy that moment whilst cleaning my bedroom window. My heart could have exploded with the love I now felt for Jesus and I couldn’t stop thanking and praising Him for becoming my Saviour and paying the price at Calvary so I could have a personal relationship with God.

Since that day He has given me strength and ability to get through trials in life that would have overtaken me before. It’s a joy to have all the anxiety I felt about where my life was going washed away by knowing and trusting that He is now completely in control of my life; and I now live for His purpose and will for my life not my own. He really has given me peace, love and joy deep down even when worries arise.